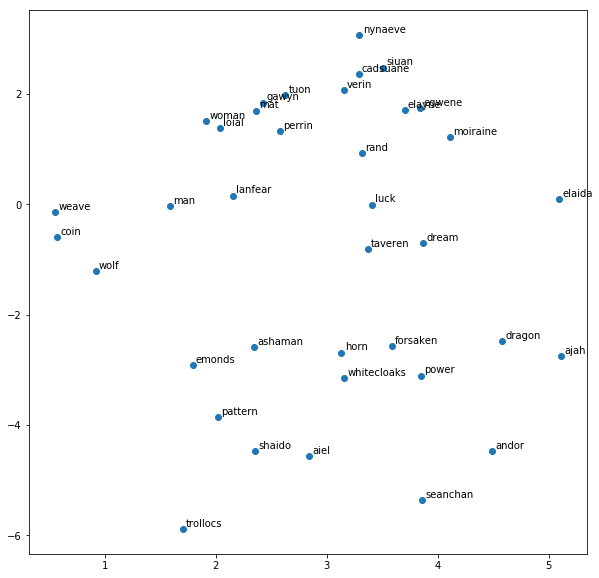 So far, we’ve looked at using word clouds and character rankings, and document similarity, but there are a few more NLP tools left to use in our analysis of The Wheel Of Time series. Today, we’ll look the results of learning word associations. To do so, we’ll need to use a modification of the document vectors discussed last post to uncover some very interesting relationships between the words in our corpus.

There are roughly 50,000 unique words used in the series. Whereas before we needed a 14 x 50,000 matrix for the book similarity, we are going to need a 50,000 x 50,000 matrix to compare our words. For books, it was easy to know which words were part of the book. It is harder to see how a word can be related to other words.

The trick commonly used to create the word vectors is to use machine learning algorithms to predict the local context of a word. There are a few variants, but they are all known as Word2Vec. As a simple example, if we are trying to find words similar to weave, we could find each instance of this word in the series. Then, by aggregating over the 5 words before and 5 words, we can calculate frequencies of these neighboring words as the values in our vector. We can further refine this by giving more weight to closer words. Finally, some machine learning and data compression is added to make all of this computationally feasible. A really fun online tool to explore the Word2Vec concept is Word2Viz, with graphical visualizations for many genre and topics.

In particular, I will be using the Gensim Python implementation of Word2Vec, which can learn a new relationship matrix for any supplied corpus of text, and provides some useful functions to make it easy to query the matrix once constructed.

Discussions of plot points and threads across the whole series follow. Please take appropriate cautions if this is important to you.

When we use these learned vectors for each word, we can ask about the similarity between two words. These are words that commonly show up in the same contexts throughout the corpus. In the table below, each row includes a key word and the five closest words according to the Word2Vec algorithm.

Since this series is an epic battle between good and evil involving magic, we can find some interesting connections between these light and dark words. Reality is often described as the pattern, and ta’veren are individuals spun out to fix the pattern when things go wrong. Magic flows from the One Power, and is wielded by creating a weave.

Next, we can see how common English words can pick up new shades of meaning from context within the series. Rand’s sword brings out common (and uncommon) weapons, characters most often use coins for food and drink, Mat’s constant rattling dice are related to other card and board games, Mat’s bond with the horn is related to the fateful dagger, Perrin’s wolf aspect evokes both his arch-enemy and his wolf mentor, and we have empirical evidence that Nynaeve’s braid gets a tug.

Finally, we can also see associations made between location words in the texts, for both countries such as Andor, towns/cities like Emond’s Field, and even the dream world of Tel’aran’rhiod. I’ve included another table of many more words below, but there’s more to uncover first.

Since we have turned each word into a vector, which is a mathematical object, we can actually do simple math operations on these words. Instead of 1 + 2 = 3, what happens when we say KING - MAN + WOMAN? This kind of word math is reminiscent of the analogies found on old SAT exams, and might make more sense when written “MAN is to KING as WOMAN is to QUEEN”.

If we use The Wheel of Time as our corpus, can we computationally understand some of the plot connections and relationships? Let’s test it out. Here are a few analogies, written using abbreviated notation, that might make sense if you have read the series.

Once you think you know the answers, scroll ahead to see what the algorithm found!

These pieces only scratch the surface of what is possible to find in the Word2Vec data. One thing to note, because this is a probabilistic algorithm, different iterations will produce similar but slightly different results, this is not the only possible set of vectors that can be learned from this corpus.